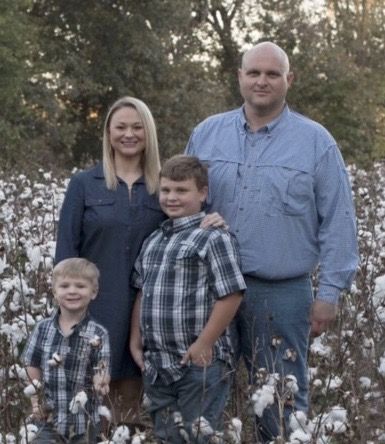 My name is Michael Woods. My bride, Ashley, and I have been married for over 12 years. We have two children- Kason and our son Kolby. Kason’s focus these days is hunting or catching whatever is in season. Kolby is following closely in his brother’s footsteps. Ashley is a nurse at the University of Mississippi Medical Center in Grenada, Mississippi while also being a full-time mom.

Born and raised in Duck Hill, Mississippi, just down the road from STEWARD LINK’s headquarters. I grew up working as general labor on local farms. Farming got in my blood and led me to a career in agriculture. After graduating from high school, I attended Mississippi State University and graduated in 2001 with a degree in agricultural economics.

In 2002, my first job after college was a claims adjuster with ARMtech Insurance Services out of Lubbock, Texas. ARMtech was a relatively new crop insurance company at that time, and it was their first year in the state of Mississippi.

During the early years, there were a lot of changes within the insurance industry and the United States Department of Agriculture’s Risk Management Agency, which oversees crop insurance.

This was a crucial time to be working my way up in the industry because the crop insurance companies were in the beginning phases of going from manually inputting information on paper to digitally on computer. As part of the transition, I offered valuable input to the process, which opened a lot of doors and was a great learning experience for me. During the early years, I made countless friends, wonderful hardworking men and women, and became familiar with the United States Department of Agriculture (USDA) agencies across the South East.

In 2011, after 10 years of working claims and being a claim supervisor, I had an opportunity to take over a crop insurance agency. In January 2011, I started selling crop insurance as Cullum Agency and the agency is going strong.

In 2014, Nick Thomas, my childhood friend, was moving back home after many years of working for the National Resource Conservation Service (NRCS). Nick quickly got his Crop Insurance Agent License and joined with me in Cullum Agency selling crop insurance.

The opportunity to meet with so many farmers, along with Nick’s background working for NRCS on USDA programs, gave us the opportunity to consult with farmers and landowners about crop insurance and conservation programs offered through the NRCS.

We formed STEWARD LINK in late 2014 with the idea of helping some of our current customers apply for the NRCS conservation programs. At that time we had no idea STEWARD LINK would be what it is today.

Since 2014, we have made exceptional progress in linking not only row crop farmers with NRCS but timber, pasture, hay, and cattle land operators as well.

STEWARD LINK continues to help more stewards of the land, and it has been very rewarding to know that we have been a part of helping conserve resources for today and future generations as well.